“Is Jessica as grown-up as she thinks she is?” 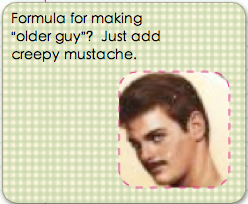 Basically, the story here is simple. Jessica and Elizabeth need to study for a tour-guide qualification exam, but instead of studying, Jessica is planning to sneak out of the house for a beach party with the lecherous Scott. Elizabeth doesn’t approve. She tells Jessica he’s “too old” for her, but we know that what really bothers her about Scott is the creepy way he behaves—shamelessly looking Elizabeth up and down when he meets her, referring to the twins as “double the fun,” and don't get me started on the drunken party he and his cool college friends once held in which they put out mattresses instead of chairs. Convincing argument against his character, no? Yet, somehow Elizabeth keeps these observations from her sister.

This perplexed me at first, but then I realized: in Sweet Valley talk, “too old” does mean “too much of a sexual predator”. Jessica talks about being able to “handle anything,” but she’s really trying to assert that she’s sexually mature enough to handle whatever Scott – or any other man – throws at her. I could go on about how obviously untrue this assertion is on her part (see Book 3!), but I’d rather just make this point: For the giant role sex has thus far played in the SVH books, the word has never been uttered. “Sexy,” yes; “sex,” no.

As All Night Long rounded Chapter 7, the “night” in question had played itself out, and I was honestly beginning to believe that the worst was over for Jessica and Elizabeth. Clearly, this was wishful thinking of the most foolish variety. How, I now ask with crystal-clear hindsight, did I expect the remaining 58 pages of the book to unfold? With one or two playful adventures, completely devoid of heart-wrenching catastrophe? Stupid, stupid, STUPID.

What happens when Jessica doesn’t show up for breakfast the following morning is a long story. About 50 pages long. And it involves Elizabeth and her perfect boyfriend Todd (expect more about them in our next installment) getting into what is surely the first of many fights that basically go like this:

TODD: Elizabeth, you are letting your bitch-ass sister take advantage of you. Stop covering her shit!

LIZ: Todd! That’s my sister you’re talking about! My  twin sister! You just don’t understand!    I hate you forever, dick!

At which point I become totally fed up with this story and begin praying for its swift ending, which is, of course, happy. Next time, I’ll remember to expect less from these books, and life will be much sweeter.

Looking for the podcast episode about book 5? Click here to warp back to the future.

I remember sneaking this one into the house because--gasp!--I was so afraid my mother would confiscate it. And then being disappointed that it wasn't any tawdrier than I'd imagined. Sigh
(Friday, September 4, 2009 - 12:04 PM)