“Are Elizabeth and Todd headed for disaster?” 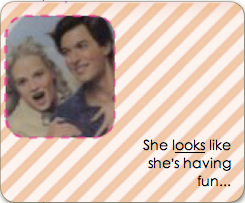 Elizabeth and Todd are the perfect couple. They love each other intensely, they passionately want each other to succeed, and each one loathes the thought of disappointing the other. If you ignore the pesky facts that Todd despises his girlfriend’s twin sister and Elizabeth loses her cool at the mere presence of another girl in Todd’s line of sight, you have yourself a relationship so mature that its occurrence between two high-schoolers is laughable. But I am willing to accept it, because I am a hopeless romantic type, and I need a solid, passionate, trusting relationship in my teen melodramas to keep me from tearing my hair out.

What I’m trying to say is, I am obsessed with Todd and Elizabeth.

For me, this has some historical precedence. I was always rooting for Dawson and Joey, and I stopped watching 90210 when Dylan and Brenda broke up (I was way too young to be watching that show! But no one could stop me…), and I didn’t think it was that weird that Cory and Topanga got married in college. Even my Barbie doll story line had a solid, romantic couple at its core – Courtney and Kevin (What? You’re telling me your Barbies didn’t have a story line?). I think this penchant for committed romances is what allowed me to get caught up in Book 6, Dangerous Love. It’s all about Todd and Elizabeth, and we finally see Elizabeth facing a somewhat believable dilemma.

Todd has saved up for quite sometime to buy the motorcycle of his dreams, but Elizabeth has trouble sharing his excitement, as her parents forbade her and Jess from riding on motorcycles long ago, after a cousin was killed in an accident. Elizabeth, curiously enough, doesn’t bother discussing the matter with her parents.  But she also keeps this information from Todd for quite some time, stupidly making excuses not to ride. It’s clear that she doesn’t want to hurt his feelings. He bought her a cute crash helmet! Come on!

Of course, eventually Elizabeth does take a ride, egged on by – what? Can you guess? – that’s right, Fear of Losing Him. When other girls start getting rides from Todd while Liz is stuck driving the Fiat home alone, Liz gradually cracks, breaking the rules in the name of love or jealousy (and also because Jessica has left her at the dance without a ride. Oops.).  Her punishment is swift and terrible: she ends up in a coma. That’s right, upon making her first ever mistake, Liz is in an ironic car accident with the very jerk Todd had just agreed to sell his bike to. It’s all just too much.

Still not enough, however, for our author. This book ends with the most asinine cliffhanger in history: Will Elizabeth live or die?? Tune in next time to find out!

(Looking for the 2018 podcast episode about this book? Click here to motor at high speed into a new era.)

I remember this book so well, and I probably last read it when I was 11 or 12. I thought it was such a compelling story, & it is probably one of the reasons I am terrified of motorcycles. This is the kind of crazy effect SVH can have on us 80s children. Now of course, looking back, I see all of your criticisms clearly. Hehe.

Hello Hello!
Okay. So, I obviously love your blog. I mean, I'm obviously in love with your blog. Obviously an old time SVH lover. Copies of the old books are few and far between IRL and I've twice had t/o restrain myself from amazon.com binges amounting to hundreds of dollars worth of 1¢ books... anyway I recently had a birthday (my 27th, also in order with you and SVH) and my 16 year old sister tried to do the right thing... she bought me some of the new (2008) copies of the books. She gave them to me in a very Jess-esque way, saying "I bought the last 3 in the series for you".... Yes, it's books 4,5, and 6. The "LAST BOOKS"??? I didn't even have the heart to tell her what a poor sap she was. Later she brought it up and I was forced to reveal to her that they were indeed not the books I was wanting but that I was eager and excited to read them (reassuring her but not myself) Well yeah. So, I read them. And they are totally totally totally horrible and just the worst possible thing ever. I read the three of them during the duration of my boyfriend watching Tango & Cash and by the end, I gave him the books and told him to get rid of them. I don't care how, just get it done.
So of course I had to come to your blog and read your awesomeness about them. BUT MOST ESPECIALLY!!!!!!! I want to say that I cannot believe this is the LAST book!!! You never get to find out if Liz lives or dies!!!!! It is just totally totally unacceptable. I actually thought they might have killed her off in the last paragraph and condensed this amazing series down to a 6 book set. Unforgivable.
I probably should have written this as an email but what's done is done. I'm typing the verification and adding comment. Marissa, you are freaking awesome. I hope this site never ever ever goes down, even when I'm old and like in my 90s and reminiscing about the good old days.
Cheers,
Miss Smog
(Tuesday, May 25, 2010 - 10:03 PM)

I don't even know if anyone else reads this anymore but I'm in the midst of reading and rereading through all these books again so I'm finding the blogs and finding all kinds of fun details - especially when reading back to back! So many fun things.

But I also realized that during the writing of most of these books the actual drinking age was 18 not 21 so a 16 year old being in a bar isn't as far fetched as you'd think (I guess). Maybe that's the thing with motorcycle licenses?