Remember Linda Ronstadt she told herself. Remember Guy's face when he talked about singers he liked. Lynne couldn't believe he would ever like her. 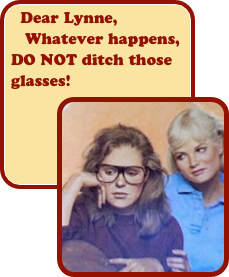 I hadn't picked up a Sweet Valley novel in months.

Perhaps I was left vulnerable, my hardened layer of jade softened by a long break from the pithy tales. Something must have happened to change me, for I was unable to resist the charms of Alone In the Crowd; somehow, it moved me.

Is it possible that this book was actually good?

I know, I know. You're thinking that this is NOT the blog you meant to surf to. What happened to angry Marissa, fed-up forever with these Orange County antics (Sweet Valley must be in Orange County, right?). Well calm down. I'm not ready to start handing out Newbery Medals or anything. If Book 28 hadn't contained at least a handful of moments that made me want to kick the main character square in the face, I think I might have had to pack up my blog and call it quits. Overall, though, it might just have been my favorite book yet, and not in the so-horrifyingly-ridiculous-you've-got-to-love-it way (that prize still goes to Wrong Kind of Girl.)

Let's get you caught up.

Lynne Henry is the kind of girl who’s basically invisible. She literally has no friends, and she spends all day aching for the moment she can return to her room and play her guitar. In addition to being seriously shy, Lynne bears the awful, unforgivable disfigurement of being tall and thin. Yikes! She sees herself as some sort of ugly androgyne who is too much of a loser to be spoken to. But the more time we spend with Lynne–and this book actually devotes more pages to her than to the Wakefield girls–the more we realize that she’s really a pretty interesting person. What’s more, Guy Chesney (guitarist and leader of the Droids, Sweet Valley High’s rock band) seems to be catching on to that fact. Lynne has a huge crush on Guy, but can’t seriously entertain the fact that he’d actually be romantically interested in her, given her terrible disfigurement, which, allow me to remind you, is tall skinniness. And frizzy hair. Also a penchant for sweatshirts. Do I smell a makeover coming on?

Lynne’s mother, who owns a salon and is extremely beautiful and fashionable, constantly offers to help Lynne spruce herself up, but Lynne just resents it, seeing this as a sign of her mother’s disappointment. In fact, Mrs. Henry is just worried that Lynne’s poor self-esteem will keep her from ever being happy. But YOU try telling Lynne that!

Lynne Henry’s opportunity for change comes in the form of a songwriting competition. The Droids are looking for a new hit–everyone agrees that this is all they need to Make It Big!–so they hold a contest at SVHS to discover some new talent. Lynne, a naturally gifted songwriter, singer, and guitarist, writes and records an amazing song called "Outside, Looking In." In addition to being the song with the most Totally ‘80s Title, it is the hands-down winner of the competition. There is, however, a catch: Lynne submitted it anonymously, not wanting her innermost thoughts and musical stylings to be revealed as her own. 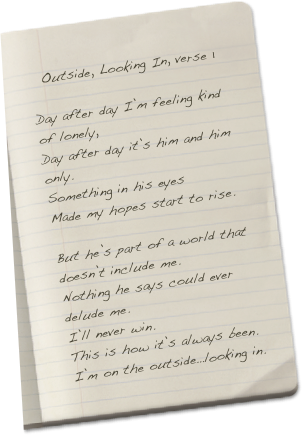 Sounds pretty good, right? It must be time, then, for the novel to start heading south. ‘Round about this point, we begin to gradually stop feeling sorry for Ms. Henry and wish that she would just suck it up and grow a pair. Once she wins the competition, it should be safe to accept the spoils of acceptance that are her reward. But, no. Why would she do that, when she can remain safely anonymous forever and fade into nothingness? In fairness, there are a few additional complications: (a) The winner is supposed to sing his or her song onstage with the Droids, which terrifies Lynne, and (b) revealing herself would likely mean revealing her undying love for Guy Chesney. The song’s lyrics mention an unrequited love, and Guy’s pretty much the only person Lynne talks to on a regular basis. Her crush would become pretty darn obvious.

Now, no one is more sympathetic about anxiety over revealing a crush on than I am. But Lynne actually knows for a fact that Guy is falling in love with the rich, wise voice he’s been hearing on the winning recording, and with the girl who possesses it. Now, self-doubt and insecurity make her feel like he’ll be crestfallen when he finds out that his “love” is for a (tall, skinny) ugmo like her.

Sweet Jesus, when is Elizabeth going to come around and fix this!? Somebody better call her up before I lose my marbles. Lo and behold, Liz waltzes into Sweet Valley's music center to pick up a record (!) while Lynne is giving a guitar lesson. Overhearing her voice, Elizabeth recognizes it as the one from the tape, and discovers the secret, just like Nancy Drew might in The Case of the Freaking Baby Who Doesn’t Realize She Has the Body of a Model. Liz reluctantly promises not to tell Lynne’s secret, but picks up an all important (and hilarious) detail.

“I’m sure he thinks the girl who sings ‘Outside, Looking In’ looks just like Linda Ronstadt–or better. I can’t disappoint him.”

All this time, poor Guy Chesney has been pining away for this mystery girl and her gorgeous voice. But, unbeknownst to him, he had actually forged a connection with her before the contest even started. He began walking to and from school with Lynne at the beginning of the book, and they talked about many things, among them favorite musicians. High on the list was Linda Ronstadt, and Lynne just could not get over the idea that she was less attractive than that particular singer. She mentions this to Elizabeth, who innocently passes it on to Guy. Guy puts the pieces together and has someone draw an artist's rendering of Lynne, spreading a flyer with the picture and an announcement that she’s the winner all over school.

But where’s my makeover? Well, Lynne finally caves just before the flyer is released, letting her poor mother fix her up. And gosh, is she ever great-looking after that makeover. Considering how easy it is for people in Sweet Valley to overcome terrible physical and social problems like obesity and poverty, the whole makeup/hairdo/new outfit transformation feels a little weak, maybe a bit too easy. And Sweet Valley hardly needed another beautiful person or another power-couple. But if it’s going to gain two more things it didn’t need, at least these two come with some thoughts in their heads and some God-given talent. This holiday season, I think that’s something we can all be thankful for. Also, this:

Posted at 02:24 PM in Losers, Minor Characters In the Spotlight, Romances, The Droids | Permalink