Don’t worry: I haven’t joined some sort of undead poultry cult. “chickenzombies” is the handle of a sweet and supercool reader who just sent me a GIANT box of books she’d unearthed while doing some housecleaning. Upon opening this box, I felt like that sparkly gold light was shining on my face like when someone opens a treasure chest. I thought I’d be generous and share some of my favorite pieces of booty with you: 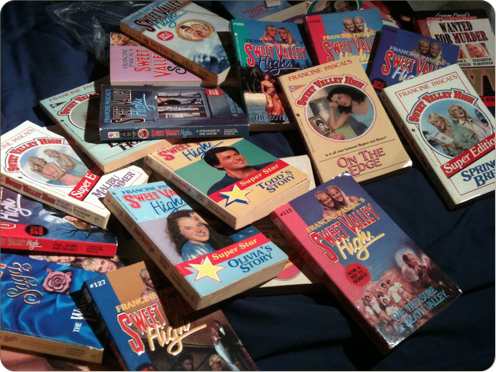 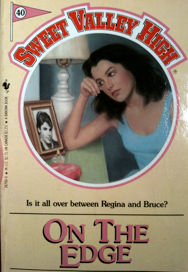 Oh, Sweet Valley High #40, the force is strong with you! I cannot believe this book is only five away. I also cannot believe that picture of Bruce on Regina’s nightstand – is that a Glamour Shot?

Much further down the line, the darkness continues. First the twins undergo major plastic surgery (how else to explain their massive facial reconstruction?), then  a madman is after them, and THEN they are trapped on some sort of cruise ship where a madman is after them…again! The mid-’90s were a dramatic time for the Wakefield girls.

The box also contained some Sweet Valley University titles, and here’s where things really get weird. Not only are these plots as wacky as ever, but WHO THE HELL ARE THESE GIRLS? On the first book, Wanted for Murder *eye roll*, the twins we see aren’t the original James Mathewuse twins, or the new painted twins we saw above on the left (A Killer on Board). These are photographed human faces. BUT they are also NOT the twins that starred in the Sweet Valley High TV series. THOSE girls (Brittany and Cynthia Daniel) can be found on the cover of Kiss of the Vampire, and the publisher doesn’t seem to care that their series was set at Sweet Valley High, not University. This is total pandemonium.