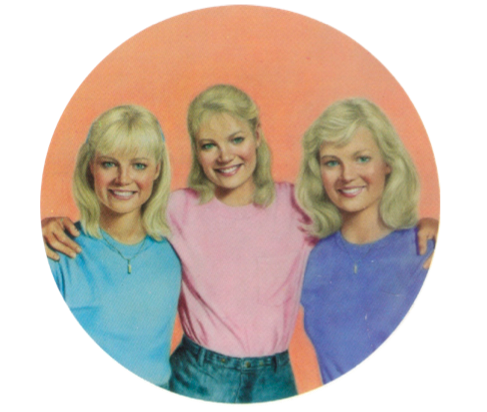 Oh, how I’ve missed you. I could go on at length about my move to California and my adventures in screenwriting (a personal tale of transformation that’s part Jessica, part Elizabeth). But suffice it to say: Now I have a master’s degree and am, at last, adequately qualified to rehash 30-year-old teen pulp novels for your reading pleasure.
Family Secrets probably started with the idea that if twins are fun, triplets are even funner - so why not introduce a new character, a relative who looks just like Liz and Jess? From this harmless premise blossoms a novel that, like so many Sweet Valley High volumes, is part schoolgirl romp, part chilling psychodrama.
The new character taking center stage is Kelly Bates, a cousin from Mom's side of the family who possesses those flawless size-six genes/jeans for which the Wakefield girls are so famous. Kelly is visiting from Tucson, temporarily staying with the Wakefields because her mother (who divorced Kelly’s father for murky, secret reasons) is getting remarried, and Kelly needs some time to “adjust to the idea.” The futility of sending a teenager to a neighboring state so she can come to terms with an incipient stepfather aside, Elizabeth, Jessica, and Kelly are thrilled to be reunited. They immediately start scheming up ways to shock their fellow students via Kelly’s surprise arrival and stunning resemblance to the twins. They’ll all go to school in the same outfit (“It’s kind of dumb, but it’s pretty funny, too, don’t you think?” says Jessica on page 15)! But the twins are a little weirded out by the way Kelly gushes over her absentee father at every opportunity, almost always at the expense of her single mother (Aunt Laura, Alice Wakefield’s sister). Kelly even plans to move in with Daddy Dearest as soon as he gets back from a business trip to France. But from what the Wakefields know of this Mr. Bates guy, they fear that Kelly’s putting him up on a pedestal of lies (my word choice).
"He lives near Sweet Valley, but for some reason my mother won't let me come out here. She's so mean! I miss my dad so much. But he'll be here next weekend for my birthday," she added with a glowing smile. "And he'll probably bring me a huge bunch of helium balloons or take me up in a glider or something. He's always doing these really off-the-wall things! I never know what to expect."
- Kelly raves about her father, p. 55 (spoiler alert: it doesn't go down like that)
At school, everyone welcomes Kelly with open arms (how could they not, given her blonde-haired, blue-eyed family pedigree), but no welcome is as warm as Kirk Anderson’s. Jessica, Elizabeth, and pretty much everyone else warn Kelly against giving “Kirk the Jerk” so much as a single chance, but she swears they just don’t know him like she’s come to know him after a few moments in his sexy presence. She looks past his constant lateness (he always has a good excuse!) and his regular fraternization with his ex-girlfriend, Marci Kaplan (“she really needed a friend,” he tells Kelly when he ignores her all night to talk to Marci), even throwing over über-eligible bachelor Nicholas Morrow as her date for the big costume party so Kirk can take her instead.
Oh yeah, did I mention the big costume party? 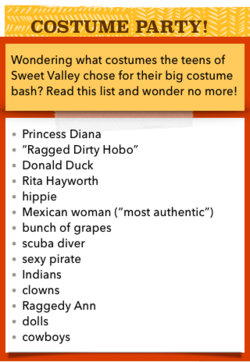 I’ve said it before, and I’ll say it again: how many damn dances can one school year contain? The answer - less than 200, more than 100 - seems to come from a realm untouched by the laws of space and time. But I digress. One of the schoolgirliest parts of Family Secrets details the conception, design, and construction of a three-person group costume for a big party at the country club. The girls decide to go as monkeys; if you ever wanted to dress as a monkey, Chapter 10 of this book doubles as an instructional costume-making guide. Specifically, they’ll be portraying See-No-Evil, Hear-No-Evil, and Speak-No-Evil. Jessica refuses to be Speak-No-Evil, not for the obvious reason (that she’s a hateful bitch) but because the she can’t bear the idea of keeping her big mouth shut for long enough to make an entrance at the party. They decide that Jessica will be Hear-No-Evil, Elizabeth (obviously) will be Speak-No-Evil, and Kelly will make her Sweet Valley Party debut as See-No-Evil.
GET IT???!?? 🙈🙉🙊
Kelly’s see-no-evil tendencies are the meat of the aforementioned psycho-drama element of Family Secrets. The "family secrets" in question seem to be secret even from Kelly herself, who is haunted throughout the novel (and presumably throughout her life) by a nightmare that she always forgets as soon as she wakes up from it. It's a nightmare that involves yelling, dish throwing, and hiding under the table. What could this nightmare mean?
After the dance, Kirk takes Kelly out to Miller's Point ("Jessica had told her all about Miller's Point: it was Sweet Valley High's premier make-out spot"), tries to get her to "share a beer" with him, and then tries to get a little under-the-leotard action. 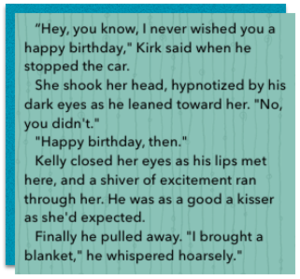 I call this "I forgot your birthday; does that turn you on?" p.128
Kelly is psyched for making out with Kirk, whom she still sees as her dream man even after all his asshattery. But she doesn't want to split his nasty trunk-warm six pack, and she certainly doesn't want to round third base at their first trip to the Point. Kirk is not pleased. He actually says the words "You're not afraid are you? A big girl like you?" After a few more attempts at sweet talk ("I've taken you out a few times, I think it's time you start showing some appreciation," and finally "It's time to grow up, Kelly. Or are you just a tease?") she finally demands that he take her home. She even kicks him (if she hadn't, I was gonna).
Kirk responds by throwing an empty bottle into the distance. The sound of breaking glass freaks Kelly's beans and not in a good way. When she yells at him to stop, he only throws more bottles and the cacophony of crashing glass against stone sends Kelly into a full on panic attack.  "The dam in her mind had finally broken," our author offers in a particularly dramatic flourish. She stumbles down the road, screaming and crying. Kirk has no fucking clue what's going on. In his shittiest move to date, he drives away, leaving Kelly stranded in the side of the road crying "Daddy! No! Stop it! Mommy!" She realizes that her nightmare was a memory. A memory of that terrifying night when she was a little girl and her parents fought and her dad threw dishes.
Personally, I think Kirk's rapiness and his comfort with leaving a crying, raving girl by the side of the road are far more terrifying than any distant memory of shattered china. But my parents never so much as yelled at each other in my presence growing up, so what the hell do I know? I was relieved when Kelly was safely returned to the Wakefields. She and her mom reunite and reconcile, Kelly having realized that she'd spent most of her life being a bitch to the woman who'd been trying to protect her from her "off-the-wall" father's temper. As an added bonus, Kelly leaves Sweet Valley and returns to Tucson, hopefully forever.
I'd like to think that some preteen girls out there read this book and were comforted in some way by Kelly's plight. Maybe they felt less alone. Maybe they felt like their parents and lives weren't so traumatic after all. Or maybe they simply realized that the boys they had crushes on were as bad as all their friends said. Maybe some of you were those girls. Kelly Bates waltzed into your life, had a bad dream, dressed like a monkey, got pawed at by a mean boy, recovered a repressed memory, and waltzed back out again, leaving you – and us all – changed for the better.
Just another week in Sweet Valley.
It's good to be back.

So glad you're back! I started my recaps up again after a lengthy absence. It's super cathartic for some reason. I'm slowly wading my way through the 20s (minor character central). I love how your blog is set up. Amazing. Please keep updating. : )