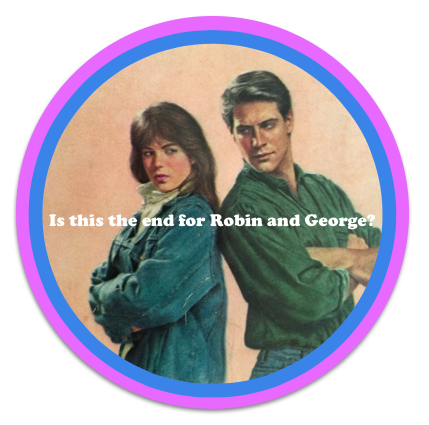 Robin and George aren't all bad. They have some interesting traits after all, such as both being teenagers who are licensed pilots, and both being very attractive (though, in Robin’s case, not without a struggle to recover from socially crippling fatness).  No, our lack of concern for the felicity of Robin and George's relationship comes from the despicable backstory of their romance – one that it's tempting to summarize here, but probably better for you to read the full recap. Maybe everyone at Sweet Valley High has forgotten that Robin and George's relationship has the power to cause psychosomatic paralysis, but I sure haven't.

So little did I care about what happens to Robin Wilson and her milquetoast boyfriend (who doesn't even go to Sweet Valley High!) that it took me nearly five over eight months to write this recap. I actually forgot enough about the plot of Decisions that I had to read it a second time in order to successfully prevent you from having to read it again (or, depending on what you're doing here, for the first time). You're welcome.

Anywho, Robin's thinking about college. Her rich aunt wants to pay for her entire education. The catch? Said aunt will only pony up the cash if Robin attends the aunt's alma mater, Sarah Lawrence. Aunt Fiona, as she is fiendishly named, doesn't give a shit that Robin never expressed any interest in moving to Yonkers, leaving the beaches of sunny Sweet Valley for a place where (at least in the late '80) the most exciting campus feature is a giant rock you can sit near.  It's not that Robin is sure she doesn't want to go to Sarah Lawrence, it's that she isn't totally sure what she wants to do, other than to make her own goddamned decisions. But when Robin so much as suggests to her mother that she might not take Fiona's "generous" offer, her mother flips out on her for being ungrateful. Complicating that dynamic, her mother is more concerned with remodeling her old kitchen, as Fiona promise has bribed Mrs. Wilson with funds earmarked for kitchen remodeling as part of the Robin-goes-to-Sarah-Lawrence-deal...no, you're right, it doesn't make any sense to me either, these two expenses are unrelated. Moms, am I right??? 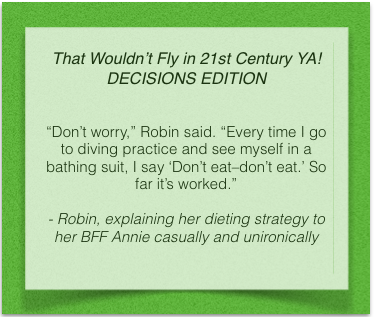 Still further complicating things, Robin knows that George won't like the idea of her moving to New York, and a year early at that...which is why she hasn't told him about applying, or getting accepted, or her aunt's scheme in general. And when she tries to tell him, he can't get a sentence into the conversation without declaring that she should definitely be going to UCLA and she'll pay for it by "don't worry about it" and the whole question of where to go to college is just so "I don't see why it's such a big deal" (p 23). Her concerns officially trivialized, Robin drops the conversation without telling George anything.

Robin has only told two people about getting accepted early admission to Sarah Lawrence: her best friend (mega-slut) Annie and her cheerleading co-captain (and probable only-as-far-as-third-base slut) Jessica. Jessica tells Elizabeth about it without a second thought, not actually even realizing Robin is trying to keep her acceptance a secret. So when Elizabeth runs into George at the town library (I would make fun of her, but that's my favorite spot to hang out too...Jesus, I'm such a fucking Elizabeth) she gets straight to blabbing. "I really think it's fantastic about Robin," she says. When George doesn't know what she means, rather than getting the hint that maybe she should stay out of other people's business, Elizabeth replies, "about being accepted early admission to Sarah Lawrence College!" Hmm...no room for confusion there, huh? George is, of course, livid and betrayed.

It's sweet, in a way, that Liz imagines that on one has any secrets and that everybody's business is her business – she writes a gossip column for pete's sake, and she considers it a journalistic enterprise. But by now you'd think she'd have learned her lesson. And nice journalistic instinct, Elizabeth: you didn't even check your source! If Liz had once spoken to Robin about Robin's news, she would have known to keep her mouth shut. But she'd only heard the news second-hand from Jessica of all people. Which begs the questions...how could someone smart enough to get accepted into a good college as a junior be dumb enough to tell Jessica Wakefield a secret?

So now that things are all out in the open, things oughta get wrapped up pretty quick, right? WRONG. So much more outing into the open needs to happen. For one thing, Robin, in a real stroke of insanity, decides that her BFF Annie must have been the one who told George about Sarah Lawrence (because Jessica "doesn't talk to George") and she probably did it to break them up and steal George away and...ph, honestly, I'm exhausted from there mere thought of this level of irrationality. And guess what? Aunt Fiona is coming to town to stay with Robin and her family for a bit! Perfect.

To simple say that Aunt Fiona is a bitch would be to leave out the important nuance of her over-the-top snobbery and elitism. She is apparently "one of New York City's most respected artists," which you think would make her kind of fun, or at least brooding and depressed, but no. She sweeps into Sweet Valley decrying everything in sight as "tacky," "small," "dated," "uninspired," or "boring." I imagine her speaking with a Katharine Hepburn accent, and at top speeds. She's a real condescension machine. When Robin screws up the courage to tell her that she hasn't decided about Sarah Lawrence, saying that she "needs some time to make up her mind," Fiona acts like Robin has literally slapped her right in the face. Robin lashes out, runs off in tears...it's a whole thing. And when she tells George about it, he gets angry, but not in a way that is actually helpful...

George's face was grim. "They've no right to mess with our plans, Robin. You're staying right here. They can't send you three thousand miles away like you're their property." - p. 128

"Because," he may as well have continued, "you're totally MY property!" Yeesh, dude.

Apparently being pulled between two wildly different college plans loved ones have invented, coping with an unfeeling mother/selfish, pouty boyfriend/megasnob aunt, co-captaining a conniving cheerleading squad, and (paranoiacally) suspecting your BFF of plotting to steal your boyfriend weren't enough headaches for our Decisions protagonist. Even though at least half of this book is spent on an asinine twins-drama that centers around a freaking RECORDER – yes, that plastic, vertical flute from elementary school music class, that kind of recorder –  our author still found room to squeeze in a big sports-game climax for poor Robin. Robin is a star diver – one of the two top divers in the whole school – and her BIG BIG BIG diving competition happens to fall during her awful aunt's visit. "How nice," you might be thinking. "Her aunt will get to cheer her on supportively. Don't be a rube, reader! Aunt Fiona thinks sports are stupid!

"Thank Christ," she essentially, but not literally, tells Robin, "you won't be able to waste your life hurling your body stylishly into the deep end of the pool once you're at Sarah Lawrence, a school where physical activity is roundly derided!"  Uggggh...this bitch.

But you guys...turns out you weren't rubes after all! Of COURSE Aunt Fiona, mom, George, and Robin's little brothers all show up to the diving meet! Not in time for Robin's first dive, sorry. BUT they show up just in time to inspire her to execute the series of perfect dives she'll need in order to counteract the shitty score she got on that first dive, which she screwed up because she was sad they weren't there to see her! Aren't families the best? Anyway, with her family now at the meet, she has joy in her heart and that joy brings out her inner Olympic diver, and obviously she wins first place!

But how did the Wilsons come to be at the previously-scorned diving competition? Well, it seems that George finally realized how to behave like human being, saw that by trying to push her to stay in California without even considering what she might want, he was being just as unfeeling as Robin's awful family. And he rushes over to the Wilson house and explains to everyone what shits they're all being, and is successful, but it takes a long time because Aunt Fiona is the worst. But now, as if by magic, they see the error of their ways. And doing perfect dives has a magical effect on Robin, who emerges from the water thinking "Now I know what to say." What words of clarity and wisdom does she conjure up? Among others, but most importantly: "I want to decide where and when I go to school."

There now. Was that so hard?

Yes. It was very, very hard. It took 157 of 167 pages. Sometimes, when you're a 16-year-old (even a really, smart, athletic, once-fat-but-now-pretty one) stating the obvious is very, very hard.