All the mysteries of Pi Beta Alpha, REVEALED AT LAST!

“The Wakefield twins have taken sides – against each other!” 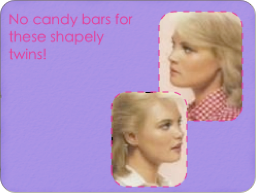 Caricatures abound in Sweet Valley, and a new one takes center stage in Book Four: the Fat Girl. Well...maybe not center stage – so far that prize always goes to the Wakefield girls. While Robin (yes, they went to the trouble of giving “Fat Girl” a name) is described as “nice,” “warm,” and “one of the smartest girls in Sweet Valley.” she is not exactly the hero of the story. It’s downright sad and quite embarrassing how important she thinks it is to be a member of Pi Beta Alpha (PBA), Sweet Valley High’s sorority for popular people. And this girl actually confuses picking up Jessica’s dry cleaning and library books with being her “best friend” !

But if Robin isn’t the hero, there’s no question who the villain is. Any guesses? That’s right, Jessica Wakefield strikes again. She finds the idea of a “blimpo” being a member of her elite club so abhorrent that she’ll stop at nothing to sabotage Liz’s plans to get Robin in. And never feel guilty about it. When she succeeds, the pain of not joining the club shocks Robin into becoming a completely different person.

Just how does Robin change, you may ask? Well, she eats a lot of salads and runs around the track. Fueled by anger, she becomes super hot in the time between winter pledge and spring homecoming. The story ends with Jessica getting delicious just desserts when Robin beats her out to become “Miss Sweet Valley”, wishing PBA a final “screw you.” I am totally serious.

Even though Robin overcomes a lot and improves as a person by this story’s end, it’s a little disturbing how much her “recovery” from fatness is the true happy ending here. Throughout this (and other) Sweet Valley High novels, we’re frequently reminded of how slim and gorgeous our stars, the Wakefield twins, are. In fact, all of their friends are, too. When she sheds those extra pounds, Robin doesn’t just become a better person, she becomes enough of a person to be worthy of Sweet Valley, CA. And you know what? That’s just creepy.

Looking for the podcast episode about Power Play? Jump ahead to a time when "#fatshaming" is a thing.