This Sweet BSC Article Will Have to Do...

...until I get my act together.

Here it is, by Stu, on the very awesome xoJane, the new online incarnation of my favorite magazine ever, Jane.

It Happened to Me: ‘The Babysitters Club’ Changed My Life

"Comas" is a category.

I’m in the middle of reading #42, Caught in the Middle, which is sort of the West Side Story of Sweet Valley novels. I’m hoping there won’t be any knife fights, though, as we just had one of those at the end of the last book. I’m also hoping for less death than West Side Story, as the book before last had that plot device pretty well locked up.

In other, way bigger news, I’m working on moving the site to a more streamlined blog engine, TypePad. TypePad plays host to my other blogs (Popular Sentiment, Cineplexus), and there are a few big advantages to moving. First and foremost, I’ll be able to publish from any computer or even from my iPhone, which should mean (GASP) more frequent posts! Also, the relative constraints of that platform will make everything look a little more streamlined, easier to search and comment on, and easier to share with the world.

One fun thing about moving to TypePad is that, as I add each entry, I get to create categories to place the entry in. There are categories for characters, and things like “drugs” and “romances.” But I just realized that the trends of this series mean I get to create category names like “terrible accidents” and “comas.” That this delights me is a testament to my love of the series, and shines a light on why I started this project.

In case you were wondering, this site is currently maintained using iWeb [ed: unless you're reading this after the move], a part of Apple’s iLife suite. I feel fairly confident that it is the world’s most complex and advanced iWeb site, and I’m pretty proud of that fact. So I’ll probably keep the old site available somewhere for the history books of the world to marvel at.

In case you were wondering, Molly Hecht is still alive.

I hate to leave you all hanging, really I do. Today I finally started Book 41. Yes, it’s been over a month since I finished Book 40, On the Edge, and I’d love to tell you it was a prolonged mourning period for Regina. But I have a way, way better excuse: I’ve been making a movie!

Alas, it is not a Sweet Valley movie (still waiting on that phone call, Diablo Cody!). But it is about high school! It’s a documentary about showchoir. Yeah. I filmed it several years ago (pre-Glee, people!) and finally have the time and energy to get it finished, which it nearly is. If you like, you can check out the website, www.showchoirdoc.com.

More on Molly Hecht as a pariah in Book 41 coming soon!

Are you a fan of Sweet Valley Confidential on Facebook? If you are, or if you’ve been looking at sweetvalleytenyearslater.com, you may have seen (and will continue to see) some quirky quizzes about Sweet Valley such-and-such.

Guess what? I wrote them!

The first quiz (scroll to the bottom) was posted recently, and the topic was “Which Sweet Valley Character Are You?” To keep things short and sweet, the possible answers were limited to “Elizabeth,” “Jessica,” “Lila,” and “Bruce.” Sorry to those of you who’ve always wanted confirmation that you’re a Winston Egbert or a Lynne Henry. Or, God forbid, some kind of Betsy Martin. :)

There are several more quizzes to come, but I don’t want to spoil the fun by telling you what they’re about. Enjoy! I’m so excited to be able to work with St. Martin’s on this.

Last week, I took a trip to New York to meet with people from St. Martin's Press and several of my fellow Sweet Valley bloggers. It was, in all seriousness, one of the coolest days of my life. Figuratively. Literally, it was effing hot.

My partners in crime trickled in: YA author (and Fearless editor!) Micol and I were first; Emily from 1bruce1 joined us; then Lillet from The Gloss, and Sarah of Smart Bitches. And there we were! In addition to a host of St. Martin's folks and marketing peeps, we were graced by the presence of Dan Weiss (the only man in the room), producer of the original Sweet Valley books, the TV show, and cohort of Francine Pascal. Who, by the way, "really wanted to be [there] but is in France for the summer." Whoa!

We were presented with t-shirts (at first, we were ALL team Elizabeth, then the tables started to turn), "Double Love" compacts, and (eeep!) FIRST CHAPTERS OF THE NEW SWEET VALLEY BOOK. Top-secret, still in draft form, and mildly earth-shattering. And this new book, called Sweet Valley Confidential was totally written by Francine Pascal, unlike the other Sweet Valley books (which were merely painstakingly outlined and thought up by Pascal, then ghost written [by "Kate William?" No.]).

What's Sweet Valley Confidential? It's a Wakefield-addict's wet dream, if you'll excuse the phrase. It's something I came to St. Martin's ready to suggest if the meeting had been about anything else. It's the story of the most famous Sweet Valley denizens, 10 years later.

What can I tell you about the book? Very little. The first chapter left me desperate for more, if only to resolve the intense drama presented therein. The twins are 27, it's 2010, and (as Dan so aptly summed it up) Elizabeth is NOT a virgin. (Emily noted that we already knew this, as Liz lost it unceremoniously to a Brit during the Elizabeth series). It's written for our demo. And it's coming out, in hardcover, in March of 2011.

In the short term, expect some really neat perks for fans, and a Facebook group. If you haven't already, start watching the 1bruce1 boards and follow @sweetvalley (me!) on Twitter. It looks like the Sweet Valley insiders (OMG! That's me!) will be teaming up again before the book is released. I hope so. But my fondest wish is that the popularity of this book will warrant a series that will put the Twilights of the world to shame. And Francine, you don't really want to write all those books, do you? I'll gladly take over. I think you'll find I'm something of an expert. :P

Hello, people of the Internet!

How much do I love twitter? It’s like the instant gratification version of the web. In the past few days, I was told about the reprinting of the Babysitters Club books (see this Nylon blog post), found out that a lot of people have been reminiscing about Sweet Valley because of some weird twitter trends (#90stweet and #rememberwhen/#doyouremember), and got followed by the mysterious paper-hatted representative of the Chicago Tribune (@coloneltribune). It’s been quite a week.

Anyway, if some form of Internet gossip brought you here today (and we both know it did), look around and have fun. It starts small at Book 1: Double Love and starts to get big round about Book 8: Heartbreaker. And seriously, we’re only like a quarter of the way through. And it’s been almost four years. So stick around.

P.S. The cover of Book 35 is extra cheesy. Check it out...twitter style

In case you were wondering 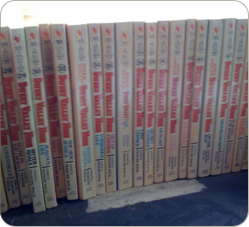 Did you ever wonder why I only update this blog, like, once a month? It sucks, I know, waiting with bated breath for the next update on who’s doing what in the halls of Sweet Valley High and in the Spanish-tiled kitchens of our idyllic California town. The primary reason I only update every-so-often is that in order to write an entry, I have to read an entire book. And sure, that book is rarely longer than 140 pages, but still, it must be read and, for that matter, acquired from often-distant sources. The other reason is that, simultaneously with working my almost-completely-unrelated fulltime job, I maintain(ish) two other blogs: Popular Sentiment (my ) and Cineplexus. And I bake things. And read arguably “more serious” books. But the blogs are really the point here. If you enjoy my sardonic-overanalysis of the Sweet Valley saga, I hope you’ll check out my similarly hilarious ramblings on film and television (Cineplexus) and culture/commercials/life-in-general (PopSent) from time to time.

From some of you readers, the question seems to be not “why not post more often?” but “why the hell are you writing this blog at all?” And then “when are you going to stop writing it?” And to those people, I say “because I find it endlessly amusing,” and “possibly never, and definitely not before I finish the entire Sweet Valley High series with Magna Edition Aftershock from December, 1998.” I haven’t made a decision about the SVU series, or, say, the Elizabeth books, and I don’t plan on crossing that bridge until I come to it. In the meantime, I hope you’ll check out my other stuff – it encourages me to keep it up –follow @sweetvalley on Twitter, and tell your friends (and favorite publications, maybe?) about my little project. We’ve got a lot of ground left to cover.

My apologies for the hiatus. As you can see, I wrote the previous post a good 40 days ago! But I never posted it until now! I have lots of excuses, among them my latest pet project, Cineplexus, but I’m thrilled to be back, and also VERY happy to say that the Diaries were hardly in hibernation for the past two months; as of press time, the home page alone has had over 17,000 hits! I’m so pleased that my creepy homage has caught on, more or less...thanks for telling your friends! The next step: write to your congressmen! :)

a brave new year to you all…

Happy New Year, everybody! Much like the Magi, I come bearing three gifts! First of all, the thrilling tale of Book 25, Nowhere to Run, which brings a heretofore marginal character (and her dirty laundry) into the spotlight. Secondly, I’ve finally added a links page with some really great sites featured on it. Let me know if you have any additions to make! And perhaps most thrilling of all is the final gift: a piece of news brought to my attention by reader Chris...sit down for this one...according to Amazon.com, a reissue of Sweet Valley High Nos.1 and 2 is coming in April. I don’t know whether to laugh or cry. There is virtually no information about this anywhere on the web, so we’re not sure how much change the books will undergo, but check the titles and synopses are definitely the same. I’ll keep you abreast of any new developments.